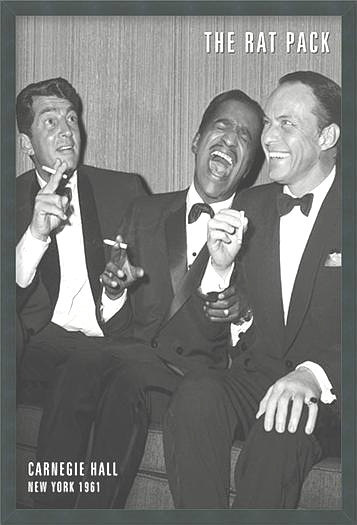 This is the official Rat Pack Poster

This poster has recently gone out-of-print!


The name "The Rat Pack" was first used to refer to a group of friends in New York. Several explanations have been offered for the famous name over the years. According to one version, the group's original "Den Mother," Lauren Bacall, after seeing her husband (Bogart) and his friends return from a night in Las Vegas, said words to the effect of "You look like a damn rat pack." "Rat Pack" may also be a shortened version of "Holmby Hills Rat Pack", a reference to the home of Humphrey Bogart and Lauren Bacall which served as a regular hangout.

The post-Bogart version of the group (Bogart died in 1957) was reportedly never called that name by any of its members ?? they called it the Summit or the Clan. "The Rat Pack" was a term used by journalists and outsiders, although it remains the lasting name for the group.

Often, when one of the members was scheduled to give a performance, the rest of the Pack would show up for an impromptu show, causing much excitement among audiences, resulting in return visits. They sold out almost all of their appearances, and people would come pouring into Las Vegas, sometimes sleeping in cars and hotel lobbies when they could not find rooms, just to be part of the Rat Pack entertainment experience.

The Rat Pack's appearances were of unprecedented value because the city would always become flooded with high rollers, wealthy gamblers who would routinely leave substantial fortunes in the casinos' coffers.

The marquees of the hotels at which they were performing as individuals would read, for example, "DEAN MARTIN - MAYBE FRANK - MAYBE SAMMY" as seen on a Sands Hotel sign.