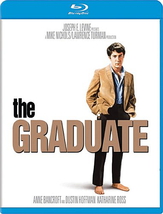 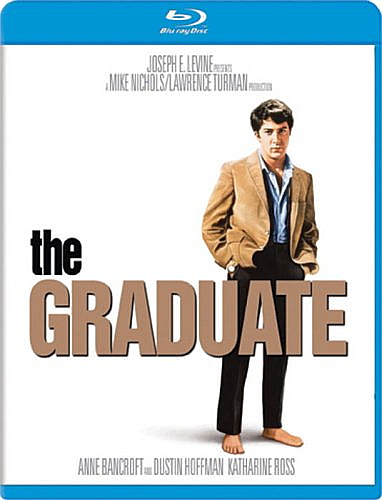 And here's to you, Dustin Hoffman. In a role that achieves popular culture iconoclasm, Hoffman plays Benjamin Braddock in The Graduate. The coming-of-age comedy and social satire keeps audiences coming back for more--not just because of Hoffman's performance but Anne Bancroft's tour-de-force portrayal of Mrs. Robinson and the score featuring some of Simon and Garfunkle's most endearing songs.

Overall, it presents the Technicolor source in good form. The cinematography by Robert Surtees is a joy to watch on Blu-ray. All the tricks he uses, including unique masking and the use of reflections and slow fades pay off as never before. Colors are rich and vibrant, resolution is an order of magnitude better than the most recent release on DVD: the 40th Anniversary edition from 2007. Coincidentally, that DVD is thrown in as a two-fer with the Blu-ray disc, providing a stunning A/B comparison as to just how far home video has come. MGM's Blu-ray looks remarkable overall and is by far the best presentation of this beloved classic.

MGM's 5.1 DTS-HD Master Audio track is a revelation on Blu-ray, with a clarity and crispness I did not anticipate. The score, featuring fantastic harmonies by Paul Simon and Art Garfunkle, is detailed and precise, with clinical characteristics that let you pick out each instrument and hear it as never before.

The atmospheric quality of many scenes is very well represented on Blu-ray, and the high resolution serves the film very well. If you're a fan of The Graduate, or even have passing interest, do not hesitate to pick up the Blu-ray. It is far and away the superior version.