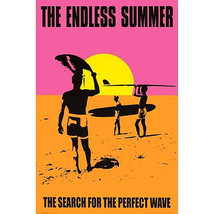 The Endless Summer Poster 24x36 inches Search For The Perfect Wave 61x90 cm added to cart. Only one available in stock 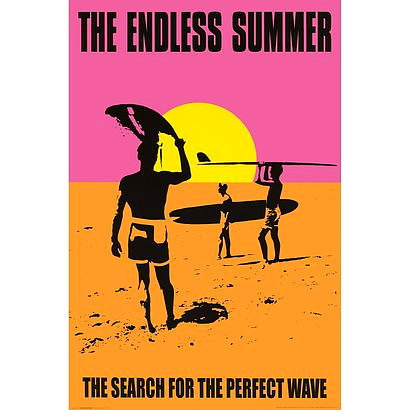 The Search For The Perfect Wave

The Endless Summer is a seminal 1966 surf movie.
Filmmaker/narrator Bruce Brown follows two surfers, Mike Hynson and Robert August, on a surfing trip around the world. Despite the balmy climate of their native California, cold ocean currents make local beaches inhospitable during the winter. They travel to the coasts of Africa, Australia, New Zealand, Tahiti and Hawaii in a quest for new surf spots and introduce locals to the sport. Other important surfers of the time, such as Miki Dora, Eugene Harris, Phil Edwards and Butch Van Artsdalen, also appear.

Its title comes from the idea, expressed at both the beginning and end of the film, that if one had enough time and money it would be possible to follow the summer around the world, making it endless.

The concept of the film was born through the suggestion of a travel agent to Bruce Brown during the planning stages of the film. The travel agent suggested that the flight from Los Angeles to Cape Town, South Africa and back would cost $50 more than a trip circumnavigating the world. After which, Bruce came up with the idea of following the summer season by traveling around the world.

The narrative presentation eases from the stiff and formal documentary of the 1950s and early 1960s to a more casual and fun-loving personal style filled with sly humor. The surf-rock soundtrack to the film was provided by The Sandals. The "Theme to the Endless Summer" was written by Gaston Georis and John Blakeley of the Sandals. It has become one of the best known film themes in the surf movie genre.

When the movie was first shown, it encouraged many surfers to go abroad, giving birth to the "surf-and-travel" culture, which prizes finding "uncrowded surf", meeting new people and riding the perfect wave.