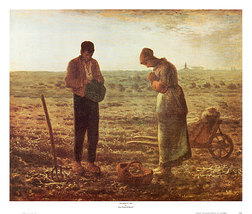 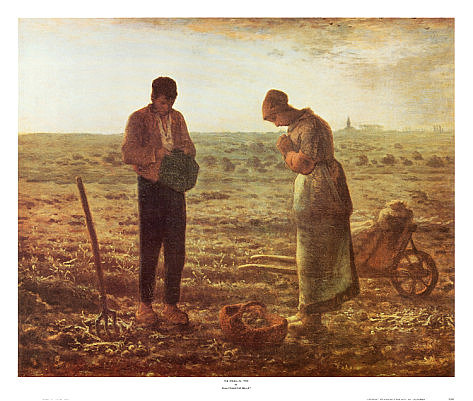 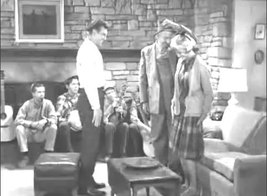 During every season of "The Andy Griffith Show" (after the first), the painting hanging above the fireplace mantel in the Taylor home was the renowned painting by Jean-Francois Millet entitled The Angelus. It was painted in the summer of 1857 and depicts a peasant farmer and his wife standing in a field saying their prayers while the church bells in the distance toll the evening Angelus. The Angelus hangs in the Louvre Museum in Paris, France.

Salvador Dali was fascinated by this work and was also of the opinion that the two figures were praying over their buried child, rather than to the Angelus. Dali was so insistent on this fact that eventually an X-ray was done of the canvas, confirming his suspicions: the painting does contain a painted-over geometric shape strikingly similar to a coffin. However, it is unclear whether Millet changed his mind on the meaning of the painting, or even if the shape actually is a coffin.

In the painting, two peasants bow their head in prayer in a potato field. The sun is setting on the horizon behind the young couple, bathing the scene in shadow and amber. A small basket rests by the foot of the woman. A pitchfork sticks up out of the tilled dirt. Far off in the distance, a steeple rises from the flat land.

The work is titled The Angelus. French artist Jean-François Millet crafted the oil painting in the middle of the 19th century. Currently, it belongs to the collection of the renowned Musée d’Orsay in Paris.

Millet lived most of his life in poverty. He originally sold The Angelus for about a hundred bucks. Fifteen years following his death, around the turn of the century, the painting sold for $150,000. Today it is undoubtedly worth millions.

The Taylors did not own the original.
See More
Did you know?
1960s
5 Mayberry actors who died during the production of The Andy Griffith Show

Due to the spiritual nature of the painting, reproductions became quite popular in Christian homes. The "Angelus" itself is a Catholic devotion commemorating the Incarnation.

Salvador Dalí saw it a different way. When Dalí was a child, a reproduction of The Angelus hung in his schoolroom. The painting freaked him out. He saw it as a funeral scene. He was particularly spooked by the basket, which he swore contained a dead infant, not humble tubers.

Here's where the story gets fascinating. Years later, as a beloved surrealist artist, Dalí had the power to prove his point. At his insistence, the Louvre scanned the painting with X-rays. Sure enough, hidden under layers of paint, was an early rough image of a geometric shape at the feet of the peasants. It looked remarkably like a coffin. So Dalí was not just some spooked goth kid.

This was also one of Vincent Van Gogh's favorite paintings.