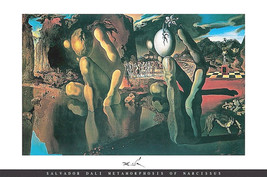 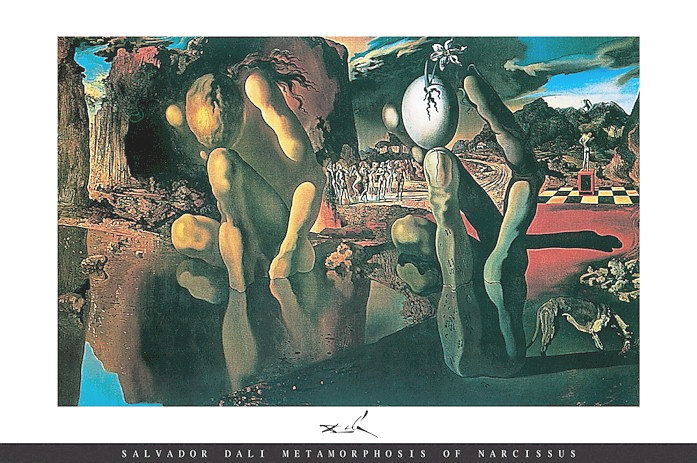 Metamorphosis of Narcissus (1937) is an oil-on-canvas painting by the Spanish surrealist Salvador Dali. This painting is from Dali's Paranoiac-critical period. According to Greek mythology, Narcissus fell in love with his own reflection in a pool. Unable to embrace the watery image, he pined away, and the gods immortalized him as a flower. Dali completed this painting in 1937 on his long awaited return to Paris after having had great success in the United States.

The painting shows Narcissus sitting in a pool, gazing down. Not far away there is a decaying stone figure which corresponds closely to him but is perceived quite differently; as a hand holding up a bulb or egg from which a Narcissus is growing. The egg has been used as a symbol for fertility in other paintings by Dali. In the background, a group of  figures can be seen, while a third Narcissus like figure appears on the horizon.

Dali's poem, below, accompanied the painting when it was initially exhibited:

Narcissus,
in his immobility,
absorbed by his reflection with the digestive slowness of carnivorous plants,
becomes invisible.
There remains of him only the hallucinatingly white oval of his head,
his head again more tender,
his head, chrysalis of hidden biological designs,
his head held up by the tips of the water's fingers,
at the tips of the fingers
of the insensate hand,
of the terrible hand,
of the mortal hand
of his own reflection.
When that head slits
when that head splits
when that head bursts,
it will be the flower,
the new Narcissus,
Gala - my Narcissus