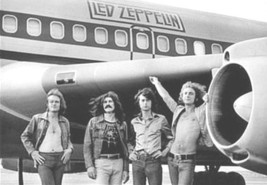 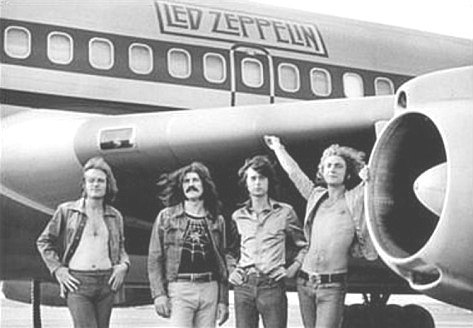 Poster is in New Condition

English rock band Led Zeppelin used the aircraft for their 1973 and 1975 North American concert tours. During the 1972 tour and in the early part of the 1973 tour the band had hired a small private Falcon Jet to transport its members from city to city, but these aircraft are comparatively light and susceptible to turbulence. After performing a show at Kezar Stadium in San Francisco in 1973 Led Zeppelin encountered bad turbulence on a flight back to Los Angeles. As a result, the band's manager Peter Grant resolved to hire The Starship for the remainder of the tour, at a cost of $30,000.

The aircraft was the same type as used by commercial airlines, but its owners allowed it to be specifically modified to suit the whims of their clients. Sherman and Sylvester invested $200,000 to reduce its seating capacity to forty and to install into the main cabin a bar, seats and tables, revolving arm chairs, a 30-foot-long (9.1 m) couch (running along the right hand side of the plane, opposite the bar), a television set and a video cassette player, complete with a well-stocked video library. An electronic organ was built into the bar, and at the rear of the craft were two back rooms, one with a low couch and pillows on the floor, and the other, a bedroom, complete with a white fur bedspread and shower room. The exterior of the plane was re-sprayed with Led Zeppelin emblazoned down the side of the fuselage.

Flying on The Starship, Led Zeppelin were no longer required to change hotels so often. They could base themselves in large cities such as Chicago, New York, Dallas and Los Angeles and travel to and from concerts within flying distance. After each show, the band members would be transported direct by limousine from the concert venue to the airport, as depicted in the Led Zeppelin concert film The Song Remains the Same.

The Starship was used throughout Led Zeppelin's 1975 US concert tour, this time featuring a different red-and-blue paint scheme with white stars similar to the United States flag, and with a smaller "Led Zeppelin" logo on the fuselage. According to Peter Grant, at one point during this tour Led Zeppelin drummer John Bonham sat in the co-pilot's seat and assisted in flying the plane all the way from New York to Los Angeles.

The Starship is included at the end of "Stairway to Heaven" on disc 2 of the Led Zeppelin DVD with both its 1973 and 1975 paint schemes.

We include in the photos above an image of The Starship in 1973, taken from the closing credits of the film The Song Remains the Same.