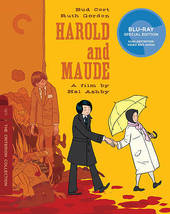 Harold and Maude The Criterion Collection Blu-ray Bluray WS New & Sealed OOP added to cart. Only one available in stock 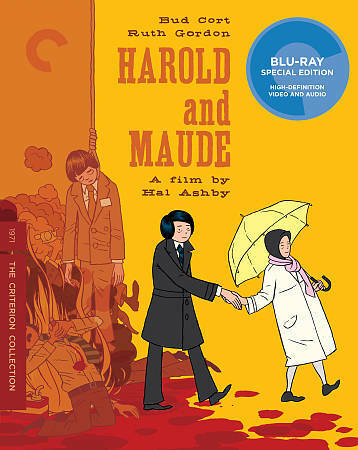 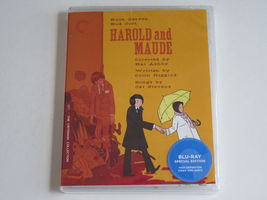 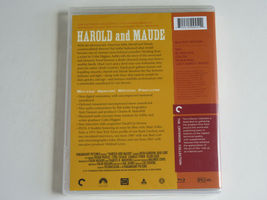 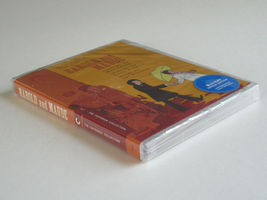 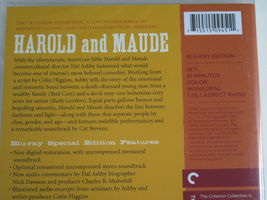 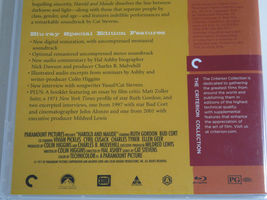 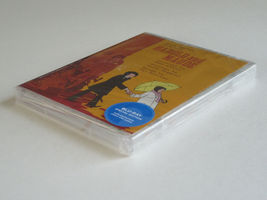 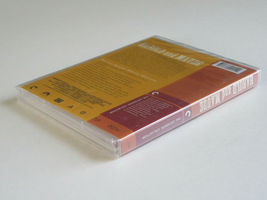 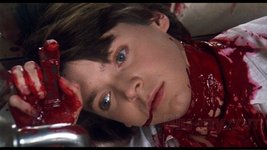 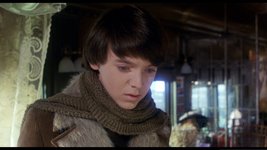 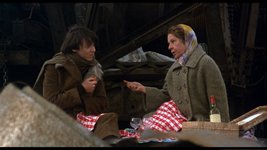 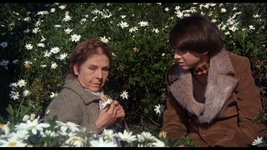 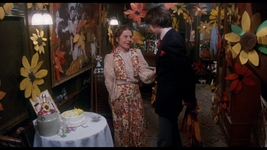 Now permanently out of production.

Paramount took back its license for this film from Criterion, so this Special Criterion Collection Edition is only available from online sellers.

With the idiosyncratic American fable HAROLD AND MAUDE, countercultural director Hal Ashby (BEING THERE) fashioned what would become the cult classic of its era. Working from a script by Colin Higgins (9 TO 5), Ashby tells the story of the emotional and romantic bond between a death-obsessed young man (THE LIFE AQUATIC WITH STEVE ZISSOUS, Bud Cort) from a wealthy family and a devil-may-care, bohemian octogenarian (ROSEMARY'S BABY, Ruth Gordon). Equal parts gallows humor and romantic innocence, HAROLD AND MAUDE dissolves the line between darkness and light along with the ones that separate people by class, gender, and age, and it features indelible performances and a remarkable soundtrack by Cat Stevens.

Young, rich, and obsessed with death, Harold finds himself changed forever when he meets lively septuagenarian Maude at a funeral.

Presented in its original Widescreen aspect ratio of 1.85:1, encoded with MPEG-4 AVC and granted a 1080p transfer, Hal Ashby's Harold and Maude arrives on Blu-ray courtesy of Criterion.

This new digital transfer was created in 2K resolution on a SCANITY film scanner from a 35mm interpositive, which had to be wetgated from the original negative since it was severely scratched and not suitable for scanning. Colorist Sheri Eisenberg, who worked on a previous transfer of the film with the late director of photography John Alonzo, referenced Alonzo's original notes and the previous telecine to generate this version. Thousands of instances of dirt, debris, splices, warps, jitter, and flicker were manually removed using MTI's DRS and Image Systems' Phoenix, while jitter and flicker were fixed using Pixel Farm's PFClean.

The high-definition transfer has wonderful organic qualities. Detail and clarity are consistently pleasing, while contrast levels remain stable. Naturally, both the close-ups and panoramic scenes convey very good depth. The film's color scheme favors soft and earthy colors that look notably healthier than they do on the old R1 DVD release Paramount Pictures issued quite some time ago. There are absolutely no traces of post-production sharpening. Problematic degraining corrections have not been performed either. Unsurprisingly, a layer of light and well-resolved grain has been retained. When projected, the film looks tight and stable around the edges. Lastly, there are no artifacts or serious banding issues to report in this review. All in all, Criterion's Blu-ray release represents a strong upgrade in terms of visual quality over the old R1 DVD release. (Note: This is a Region-A "locked" Blu-ray disc. Therefore, you must have a native Region-A or Region-Free PS3 or SA in order to access its content).

There are two audio tracks on this Blu-ray disc: English LPCM 1.0 and English LPCM 2.0 (Stereo). For the record, Criterion has provided optional English SDH subtitles for the main feature.

Thankfully the film’s look hasn’t been compromised on this Blu-ray release. The picture quality is outstanding. The film itself is full of soft-focus shots as well as a lot of dark scenes, so I judge this according to what it is inherent in the film itself and if the transfer spoils any of that, and it doesn’t. There’s a strong grain structure throughout the film, perfect contrast levels, accurate skin tones and lovely color reproduction. Honestly, the film looks as it should on the format provided.  For the audio portion, you get two options, both PCM tracks: English Mono and Stereo.  Both tracks sound great, but the stereo track is a bit sweeter because of Cat Stevens’ music really dominating the soundscape.  On both tracks, the dialogue is perfectly clear and audible.  There isn’t much in the way of sound effects, but what’s there works with the film very well. You can’t really go wrong with either track. There are also subtitles in English for those who want them. In terms of dynamic progression, the two lossless tracks are quite similar, with the Stereo track possibly opening up the film in selected areas better. The Mono track adds a stronger period feel to the film. The dialog is equally stable, clean, and easy to follow on both tracks. For the record, there are no distortions or audio dropouts to report.

New digital restoration, with an uncompressed monaural soundtrack on the Blu-ray edition
Optional remastered uncompressed stereo soundtrack on the Blu-ray edition
New audio commentary by Hal Ashby biographer Nick Dawson and producer Charles B. Mulvehill
Illustrated audio excerpts from seminars by Ashby and writer-producer Colin Higgins
New interview with songwriter Yusuf/Cat Stevens
English subtitles for the deaf and hard of hearing
PLUS: An essay by film critic Matt Zoller Seitz; a 1971 New York Times profile of star Ruth Gordon (Blu-ray only); and two excerpted interviews, one from 1997 with star Bud Cort and cinematographer John Alonzo and one from 2001 with executive producer Mildred Lewis (Blu-ray only) with Booklet & Sticker.