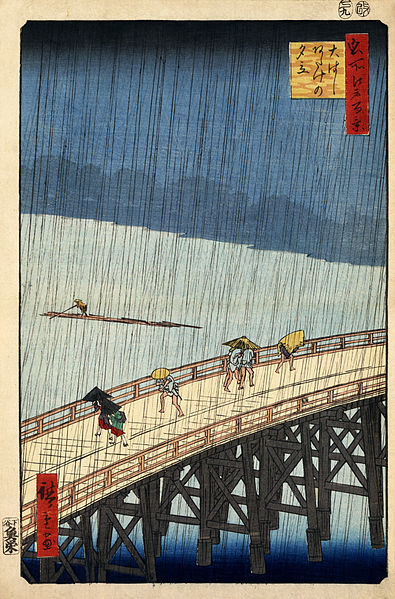 Vincent Van Gogh copied two of the One Hundred Famous Views of Edo  which were among his collection of ukiyo-e prints.

Utagawa Hiroshige (?, 1797 October 12, 1858) was a Japanese ukiyo-e artist, and one of the last great artists in that tradition. He was also referred to as And Hiroshige an irregular combination of family name and art name) and by the art name of Ichiysai Hiroshige.

Hiroshige was born in 1797 and named "And Tokutar" in the Yayosu barracks, just east of Edo Castle in the Yaesu area of Edo (present-day Tokyo). His father was And Gen'emon, a hereditary retainer (of the doshin rank) of the shogun. An official within the fire-fighting organization whose duty was to protect Edo Castle from fire, Gen'emon and his family, along with 30 other samurai, lived in one of the 10 barracks; although their salary of 60 koku marked them as a minor family, it was a stable position, and a very easy one Professor Seiichiro Takahashi characterizes a fireman's duties as largely consisting of revelry.

Like many other low-ranked samurai, Hiroshige's salary was insufficient for his needs, and this motivated him to look into artisanal crafts to supplement his income. It was easy to balance his job and his artistic pursuits, as a fireman was only intermittently busy.

In his declining years, Hiroshige still produced thousands of prints to meet the demand for his works, but few were as good as those of his early and middle periods. He never lived in financial comfort, even in old age. In no small part, his prolific output stemmed from the fact that he was poorly paid per series, although he was still capable of remarkable art when the conditions were right his great One Hundred Famous Views of Edo  Meisho Edo Hyakkei ) was paid for up-front by a wealthy Buddhist priest in love with the daughter of the publisher, Uoya Eikichi (a former fishmonger).

In 1856, Hiroshige "retired from the world," becoming a Buddhist monk; this was the year he began his One Hundred Famous Views of Edo. He died aged 62 during the great Edo cholera epidemic of 1858 (whether the epidemic killed him is unknown) and was buried in a Zen Buddhist temple in Asakusa.