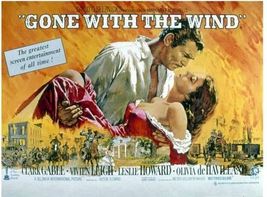 Gone With The Wind Poster 24x18 inches Rhett and Scarlett Atlanta Burning added to cart. Only one available in stock 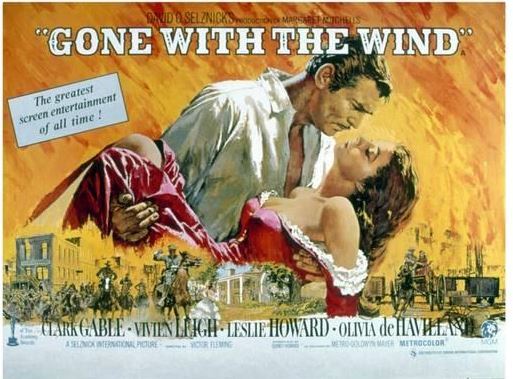 This rare Gone With The Wind

Gone with the Wind is a 1939 American epic historical romance film adapted from Margaret Mitchell's Pulitzer-winning 1936 novel and produced by David O. Selznick, of Selznick International Pictures. Set in the 19th-century American South, the film tells the story of Scarlett O'Hara, played by Vivien Leigh, and her romantic pursuit of Ashley Wilkes (Leslie Howard) who is married to his cousin, Melanie Hamilton (Olivia de Havilland), and her marriage to Rhett Butler (Clark Gable). Set against the backdrop of the American Civil War and Reconstruction era, the story is told from the perspective of white Southerners.

The production of the film was troubled from the start. Filming was delayed for two years due to David O. Selznick's determination to secure Clark Gable for the role of Rhett Butler, and the "search for Scarlett" led to 1,400 women being interviewed for the part. The original screenplay was written by Sidney Howard, but underwent many revisions by several writers in an attempt to get it down to a suitable length. The original director, George Cukor, was fired shortly after filming had begun and was replaced by Victor Fleming, who in turn was briefly replaced by Sam Wood.

The film received good reviews upon its release in December 1939, although some reviewers found it dramatically lacking and bloated. The casting was widely praised and many reviewers found Vivien Leigh especially suited to her role as Scarlett. At the 12th Academy Awards held in 1940, it received ten Academy Awards (eight competitive, two honorary) from thirteen nominations, including wins for Best Picture, Best Director (Victor Fleming), Best Adapted Screenplay (posthumously awarded to Sidney Howard), Best Actress (Vivien Leigh) and Best Supporting Actress (Hattie McDaniel, becoming the first African-American to win an Academy Award). It set new records for the total number of wins and nominations at the time. The film was immensely popular becoming the highest-earning film made up to that point, and retained the record for over a quarter of a century.

The film has been criticized for its historical revisionism and glorification of slavery, but nevertheless it has been credited for triggering changes to the way African Americans are depicted on film. It was re-released periodically throughout the 20th century and became ingrained in popular culture. It has been referenced, parodied and analyzed on numerous occasions. Adjusted for inflation, it is the most successful film in box-office history, and has placed in the top ten of the American Film Institute's list of top 100 American films since the list's inception in 1998. In 1989, Gone with the Wind was selected to be preserved by the National Film Registry.