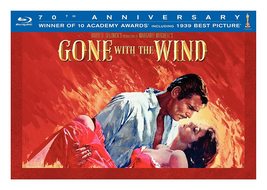 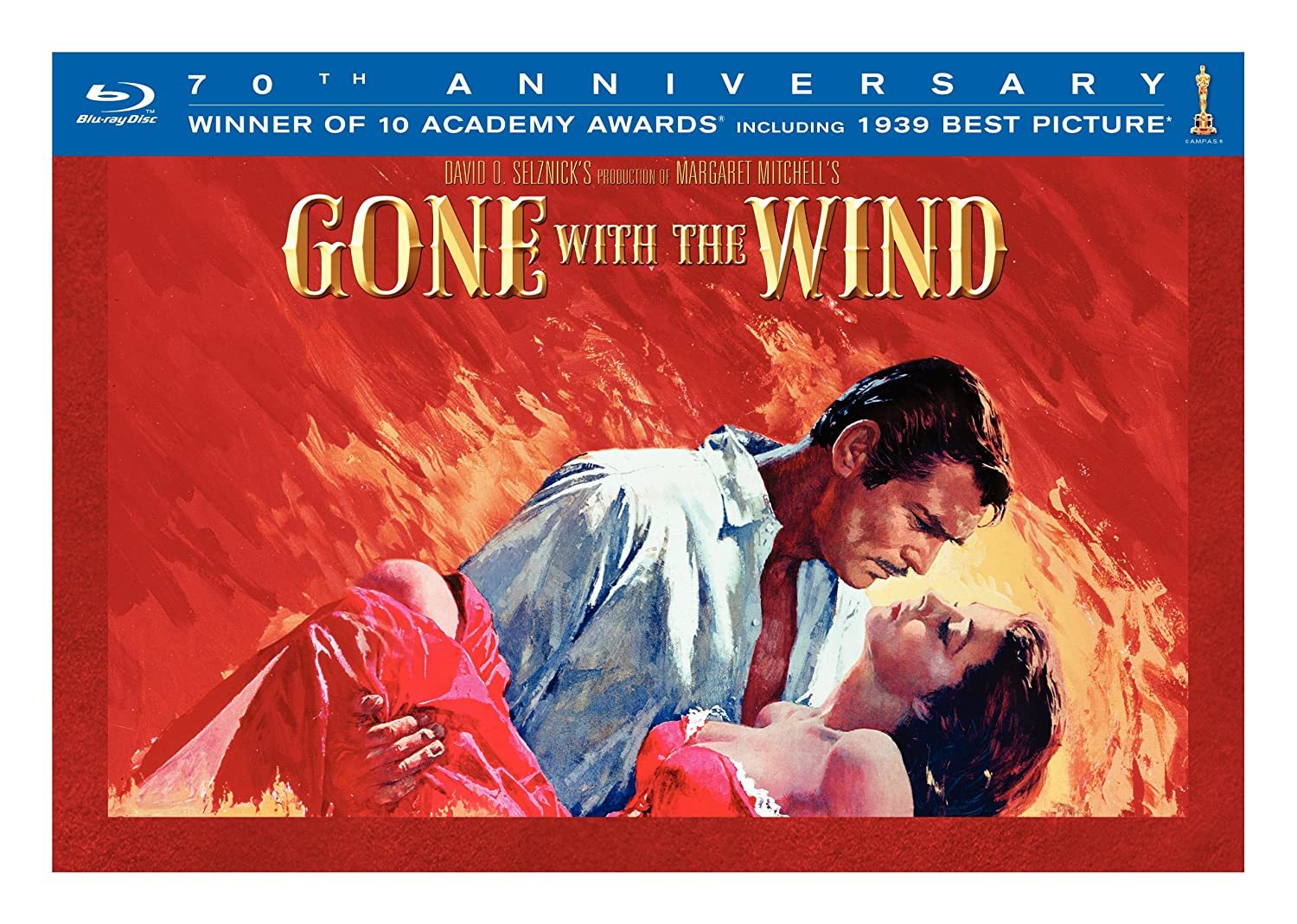 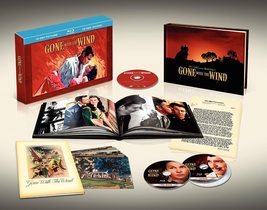 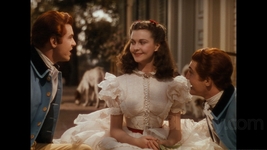 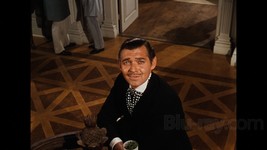 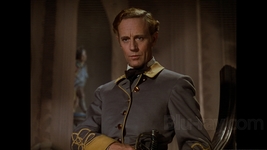 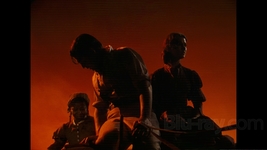 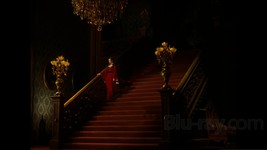 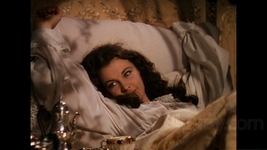 GONE WITH THE WIND

IN A VELVET BOX

CD SAMPLER OF THE SOUNDTRACK SCORE.

BLU-RAY OF GONE WITH THE WIND

IS FULLY RESTORED IN HIGH DEFINITION

The Ultimate Collector's Edition of Gone with the Wind is beautifully restored for Blu-ray, showing off how good a movie can look even many decades after its release. The second Blu-ray disc has a wide variety of bonus material. New for the Ultimate Collector's Edition are two 2009 documentaries: 1939: Hollywood's Greatest Year is narrated by Kenneth Branagh and summarizes the famous films that debuted that year, including Gone with the Wind, The Wizard of Oz, Stagecoach, and Mr. Smith Goes to Washington; "Gone with the Wind: The Legend Lives On" is a 33-minute study of the legacy of the movie, with interviews of film critics, Ted Turner, former Georgia Senator Max Cleeland, and surviving cast member Anne Rutherford (Careen O'Hara).

Also new for the Ultimate Collector's Edition is Moviola: The Scarlett O'Hara War, a 1980 television movie that dramatizes the casting of Gone with the Wind, starring Tony Curtis, William H. Macy, Sharon Gless, Morgan Brittany, and others.

Much of the rest was on the 2004 four-disc edition, including the commentary track by Rudy Behlmer and documentaries on Clark Gable, Vivien Leigh, other actors, and the filming and restoration of the movie. The third disc is a standard double-sided DVD of the documentary MGM: The Lion Roars, and the Ultimate Collector's Edition comes in an oversize box with a beautiful photo book of stills and theatrical posters, reproductions of studio correspondence and a publicity booklet, a soundtrack CD sampler, and art print cards.

Warner has taken its catalog titles more seriously than perhaps any other major studio currently releasing its classics on Blu-ray. If they haven't always hit things completely out of the ballpark, they're out there swinging for the fences and more often than not connecting big-time and providing film lovers with many reasons to celebrate.

The recent Blu-ray upgrade of The Wizard of Oz in its Collector's Edition is just the latest example of Warner going the extra mile in its restoration efforts, and Gone With the Wind stands proudly next to Oz as one of the sharpest-looking high-definition images of a classic film title yet delivered to the public. Encoded via VC-1, Gone With the Wind's original 1.37:1 image is a marvel to behold, with a beautifully rich and complex lifelike film texture that has noticeable but never overwhelming grain. Colors are astoundingly brilliant throughout this film, with gorgeous saturation, and at times breathtaking hues.

Scarlett's scandalous red dress has never been more crimson, and Leigh's eyes sparkle and shine with depth and luster as never before. Just take a gander at the deeply saturated Technicolor reds in some of the screenshots I've provided and you have a good indication of how spot-on the bulk of this film's color is. As mentioned below, this film underwent one major scrubbing a few years ago for its 4-disc DVD release, and the new 8K re-do for this release is simply amazing.

Depth of field reveals a level of detail in backgrounds and matte paintings as never before, and items at the forefront of the image simply are astoundingly well-detailed. Warner has done itself proud with this release and I doubt there will be any major complaints from even the most demanding viewers.

Gone With the Wind offers both the original mono track as well as a repurposed Dolby TrueHD 5.1 mix, which is rather conservative in its surround ambitions, but which cleans and clarifies the source material rather dramatically at times. A lot of purists decry these surround reimaginings, but I have a hunch few will argue about the propriety of this particular renovation. Dialogue is almost inescapably in the front center channel. Surround channels kick in where you'd expect them to, in such bombastic segments as the Civil War battles. Steiner's score typically also fills all the channels. I was rather impressed with the opening up of the sound itself. Too often Dolby tracks, even lossless high-def iterations, sound to me like they're overly compressed, especially on the high end. You'll notice quite a bit more hiss on the mono track, but that noise reduction in the TrueHD track does not mean a loss of the high end, which is to be lauded. This is a subtly repurposed 5.1 mix that preserves the front and center sound field of the original soundtrack while gently nudging it into the surround channels at appropriate times. While even the TrueHD re-do can't completely overcome the technical limitations of the original recordings, this is really quite an excellent upgrade that should delight even the most discriminating listener.