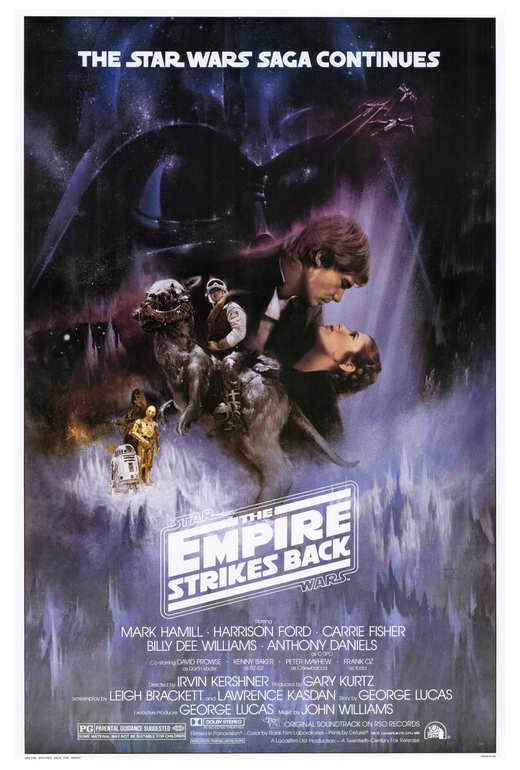 The film is set three years after the original Star Wars. The Galactic Empire, under the leadership of the villainous Darth Vader, is in pursuit of Luke Skywalker and the rest of the Rebel Alliance. While Vader chases a small band of Luke's friends??Han Solo, Princess Leia Organa, and others??across the galaxy, Luke studies the Force under Jedi Master Yoda. But when Vader captures Luke's friends, Luke must decide whether to complete his training and become a full Jedi Knight or to confront Vader and save his comrades.

HOW TO FIND A GREAT LOOKING POSTER FRAME FOR UNDER $20 !

Looking for a stylish black poster frame that's affordable? We highly recommend Mainstays Trendsetter 27 x 40 inches & 24 x 36 inches Black Poster Frames. You can find them at art supply stores--but especially, and less expensively, at Walmart--for under $20 ! (They don't bow & the frame doesn't come apart, like others you've probably seen.) The lightweight construction makes these 24x36 or 27x40 poster frames ideal to display on your walls. These contemporary poster frames can be hung either horizontally or vertically. The durable plexi-glass protects your favorite posters from air, dust & sunlight, while keeping them perfectly flat. By offering you the best & rarest posters, and letting you know the least expensive way to show them off, you can decorate home and/or office with outstanding works of art.

5 out of 5 Inexpensive solid frame Been searching for a 27x40 frame and they ran between $30-80...I'm impressed with this frame. Good quality for a small price.

5 out of 5 Great frame for movie posters! Used it for a movie poster. Looks very sleek and nice hanging up, and makes the poster look awesome!

5 out of 5 great frame Is pretty, is lasting, is not twisting or bending, is light, is not too shiny, doesn't look cheap, perfect!

5 out of 5 Great Movie Poster Frame. Finding large frames at an economical price point can be difficult especially for frames that will fit a Movie Poster. Wal-Mart by far had the best price for a great frame.

5 out of 5 This frame is just what we wanted. Inexpensive, protects an old poster, and fills the space handsomely. Now we can share this treasure.

5 out of 5 Awesome frame...excellent price!!! Needed a frame for movie posters. Of all I found this is truly the best and the most reasonably priced!

5 out of 5 Twice as nice for half the price! If you've been killing yourself trying to find a quality 27x40 frame for under $100, this is it! I'd been all over the internet looking for an inexpensive frame for a movie poster and what I found were junky frames with molding that separates and won't lie flat. This frame has a fixed molding; you backload your pictures/poster right into it. I like this frame so much I'm getting 4 more, 2 to replace the garbage frames I bought elsewhere. You can stop looking now.

5 out of 5 Excellent product, meet all my expectations Bought it to display a large poster. Have a very positive comments about this display from many people.

5 out of 5 Office Space remodeled... I bought four of these frames for my remodeled office space. I had four Star Wars poster that I want to hang in the new space and looked everywhere for poster frames that where going to meet my needs. Everything I found was at least $100.00 or above. I ran across these at Walmart. They look great on the wall. For the price you can not beat it; that is true. The look that I achieved on the wall is the same look or very close to the same look that the other high dollar frames offered.

Pick these frames up at your local store, if possible, since frames of this size are sometimes damaged in shipping. (Although the vast majority of reviewers reported safe deliveries.)