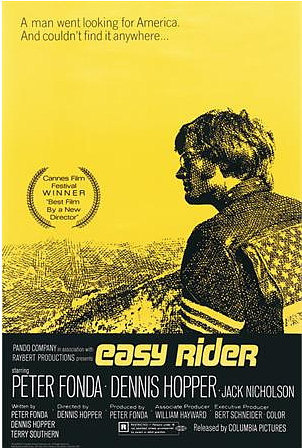 Poster is in mint condition.

"A man went looking for America,

And couldn't find it anywhere..."

Easy Rider is a 1969 American road movie written by Peter Fonda, Dennis Hopper, and Terry Southern, produced by Fonda and directed by Hopper. It tells the story of two bikers (played by Fonda and Hopper) who travel through the American Southwest and South. The success of Easy Rider helped spark the New Hollywood phase of filmmaking during the early 1970s. The film was added to the Library of Congress National Registry in 1998.

A landmark counterculture film, and a "touchstone for a generation" that "captured the national imagination," Easy Rider explores the societal landscape, issues, and tensions in the United States during the 1960s, such as the rise and fall of the hippie movement, drug use, and communal lifestyle. Easy Rider is famous for its use of real drugs in its portrayal of marijuana and other substances.

When seeing a still of himself and Bruce Dern in The Wild Angels, Peter Fonda had the idea of a modern Western, involving two bikers traveling around the country and eventually getting shot by hillbillies. He called Dennis Hopper, and the two decided to turn that into a movie, The Loners, with Hopper directing, Fonda producing, and both starring and writing. They brought in screenwriter Terry Southern, who came up with the title Easy Rider. The film was mostly shot without a screenplay, with ad-libbed lines, and production started with only the outline and the names of the protagonists. Keeping the Western theme, Wyatt was named after Wyatt Earp and Billy after Billy the Kid.

The motorcycles for the film, based on hardtail frames and

engines, were designed and built by two African-American chopper builders - Cliff Vaughs and Ben Hardy - following ideas of Peter Fonda, and handled by Tex Hall and Dan Haggerty during shooting.

In total, four former police bikes were used in the film.

, 1950 and 1952 Harley Davidson Hydra-Glide bikes were purchased at a sale for $500, equivalent to about $3300 in current money. Each bike had a backup to make sure that shooting could continue in case one of the old machines failed or got wrecked accidentally. One "Captain America" was demolished in the final scene, while the other three were stolen and probably taken apart before their significance as movie props became known. The demolished bike was rebuilt by Dan Haggerty and shown in a museum. He sold it at a sale in 2001. It now resides at the National Motorcycle Museum in Anamosa, Iowa. Many replicas have been built since the film’s release.

Hopper and Fonda hosted a wrap party for the movie and then realized they had not shot the final campfire scene. Thus, it was shot after the bikes had already been stolen, which is why they are not visible in the background as in the other campfire scenes.