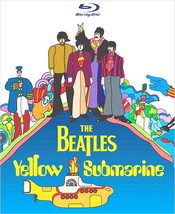 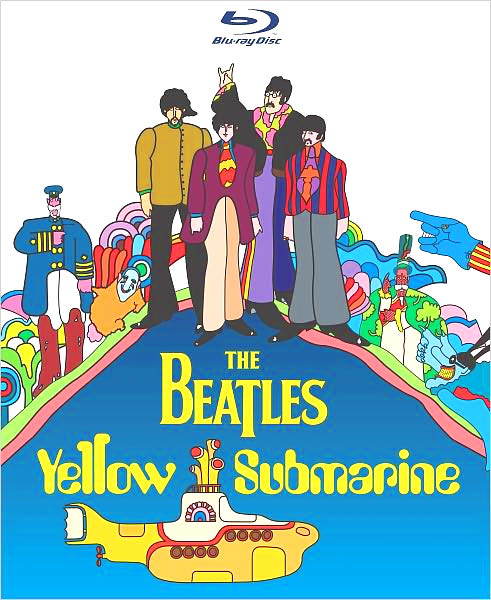 Long out of print, the film has been restored in 4K digital resolution for the first time by Paul Rutan Jr. and his team of specialists at Triage Motion Picture Services and Eque Inc. Due to the delicate nature of the hand-drawn original artwork, no automated software was used in the digital clean-up of the film's restored photochemical elements. This was all done by hand, frame by frame.

Directed by George Dunning, and written by Lee Minoff, Al Brodax, Jack Mendelsohn and Erich Segal, Yellow Submarine began its voyage to the screen when Brodax, who had previously produced nearly 40 episodes of ABC's animated Beatles TV series, approached The Beatles' manager Brian Epstein with a unique vision for a full-length animated feature.

Yellow Submarine, based upon a song by John Lennon and Paul McCartney, is a fantastic tale brimming with peace, love, and hope, propelled by Beatles songs, including "Eleanor Rigby," When I'm Sixty-Four," Lucy in the Sky With Diamonds," All You Need Is Love," and It's All Too Much." When the film debuted in 1968, it was instantly recognized as a landmark achievement, revolutionizing a genre by integrating the freestyle approach of the era with innovative animation techniques.

Digi Blu-Ray to include 16 page booklet, reproductions of film cells of each of the four Beatles characters + stickers.

Fully restored in 4K and presented in the original aspect ratio of 1:66-1

If Norman Rockwell was America's "national" illustrator for the bulk of the first half of the twentieth century, the counter culture had its own upstart artist, one whose approach was distinctly at odds with the photorealism of the iconic Saturday Evening Post cover painter. Peter Max's brightly colored, quasi-hallucinogenic offerings seemed to capture the zeitgeist of the sixties in a way that no other of his contemporaries was quite able to. Though Max is often incorrectly attributed as having designed Yellow Submarine, there's little doubt that his spirit, if not his actual artistic contributions, infuses much of the look of the film, vociferously contrarian opinions by the actual filmmakers and animators nothwithstanding. (It may be no mere coincidence that one of the chief villains—albeit a lovable if dunderheaded one—in the film is named Max.) While the song "Yellow Submarine" may have helped spark the genesis of the project, as Production Supervisor John Coates discusses in his commentary included on this Blu-ray, it was actually the then very successful Saturday morning King Features cartoon version of The Beatles that had spurred serious interest in developing a full length animated feature for the Fab Four. But the look of Yellow Submarine, part Peter Max but pretty much all Op and Pop Art, became the film's most lasting legacy, and now the film is debuting on a pretty spectacular looking Blu-ray that features a hand done frame by frame restoration replete with a new 4K scan of the elements. Psychedelia has never looked quite this good before, and aging hippies may well be able to have virtual flashbacks without any chemical or herbal enhancement whatsoever.

The kind of funny thing is, as spacey and undeniably hallucinogenic as Yellow Submarine is, it's in some ways the most classically structured of any of The Beatles' brief oeuvre of films. An undersea paradise known as Pepperland is full of the music of the spheres, or at least the oceans, until a vicious invading horde of Blue Meanies makes the country tuneless. An escapee from Pepperland travels in a magical yellow submarine to Liverpool where he connects with The Beatles and persuades them to return to Pepperland to defeat the Blue Meanies and restore music and happiness to his native region. That of course is the barest of outlines, and in fact the film is itself kind of an outline which relies on the ravishing Beatles score to fill in the blanks. While some of the tunes are rather oddly shoehorned into the putative storyline ("Eleanor Rigby", for example), the amazingly inventive animation that accompanies all of them make any qualms rather minor and short-lived.

If there is an undeniable Peter Max-ian vibe to a lot of Yellow Submarine, it must also be granted that designer Heinz Edelmann brought an astoundingly wide array of techniques to the film, techniques which still dazzle to this day, especially in this lustrous new presentation. Edelmann liked using cut out figures (something that Terry Gilliam would mimic in his iconic animated sequences for Monty Python's Flying Circus), but combined with the cut outs are actual live action film elements (including a "cameo" of sorts featuring the actual Fab Four) and all sorts of graphical elements which include everything from gears and cogs to numbers and words dancing across the screen.

Yellow Submarine is a synesthesiac assault on the senses that ends up blending sight and sound in completely magical ways. If you've never done drugs, Yellow Submarine is probably one of the best recreations of a "trip" imaginable. If you are "experienced" (as the sixties vernacular once coined it), Yellow Submarine will probably be a festival of hallucinogenic memories. Even without the psychedelic reference points, the film is an incredibly inventive, lovable piece of charming entertainment that is also surprisingly smart and funny a lot of the time (one of the co-writers was none other than Harvard and Yale professor Erich Segal, soon to set the bestseller lists aflame with Love Story). While Yellow Submarine may be an indelible relic of the sixties, it has retained a certain timelessness that is still immensely pleasurable today.

Yellow Submarine is presented on Blu-ray courtesy of EMI with an AVC encoded 1080p transfer in 1.67:1. This new presentation benefits from both a photochemical restoration as well as a frame by frame digital clean up that was done by hand. According to the press release accompanying this Blu-ray, the film was digitally cleaned frame by frame by hand since it was felt an automated attempt at restoration could not address the nuances of the multidisciplinary animation style. This release is also culled from a 4K scan and the results are simply spectacular. To quote from the closing credits:

Colors are unbelievably bold and line detail is exceptionally strong. While some of the live action film elements are not in great shape (and never were), the overall appearance of Yellow Submarine is amazingly sharp and precise. This is simply a stunningly effective high definition presentation, one that proves an animated film doesn't have to be created in a purely digital environment to end up looking nearly picture perfect on Blu-ray.

This is a wonderfully entertaining film, despite being patently odd most of the time, and this new high definition presentation makes the most of the film's video and audio. This is one of the stellar Blu-ray release. Highly recommended.

EMI hasn't skimped on providing nice audio options on Yellow Submarine. Three lossless audio mixes are included, a DTS-HD Master Audio 5.1 surround mix, the original mono soundtrack delivered via an uncompressed LPCM 2.0, and a repurposed stereo mix also delivered via LPCM 2.0. (For the record, German and Italian language tracks are provided in standard Dolby Digital 5.1 mixes.) The DTS-HD Master Audio 5.1 mix is stupendously effective, with brilliant clarity and excellent fidelity. Lovers of The Beatles' music will no doubt be very excited by the precision this track affords. The low end is especially impressive. The surround channels are used consistently not just for the music elements but for the panoply of wild sound effects that fill up the soundtrack, but their use is incredibly effective in the music elements, especially in moments like the phased and chorused vocals in the verses of "Lucy in the Sky with Diamonds".