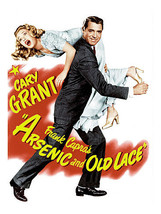 Arsenic And Old Lace Poster 24x36 inches Priscilla Lane Cary Grant Out of Print added to cart. Only one available in stock 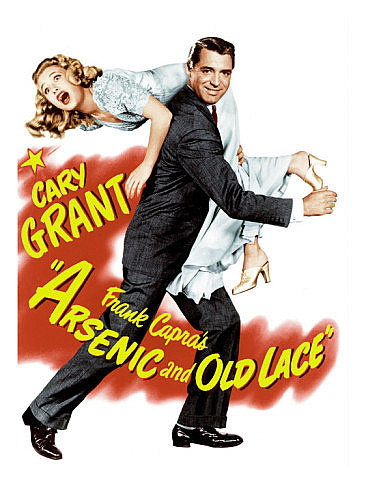 This rare out of print poster

It is in Mint Condition

is a 1944 film directed by Frank Capra based on Joseph Kesselring's play of the same name. The script adaptation was by twins Julius J. Epstein and Philip G. Epstein. Capra actually filmed the movie in 1941, but it was not released until

1944, after the original stage version had finished its run on Broadway. The lead role of Mortimer Brewster was originally intended for Bob Hope, but he couldn't be released from his contract with Paramount.

Capra had also approached Jack Benny and Ronald Reagan before going with Cary Grant. Boris Karloff played Jonathan Brewster, who "looks like Karloff", on the Broadway stage, but he was unable to do the movie as well because he was still appearing in the play during filming, and Raymond Massey took his place.

In addition to Grant as Mortimer Brewster, the film also starred Josephine Hull and Jean Adair as the Brewster sisters, Abby and Martha, respectively. Hull and Adairas well as John Alexander (who played Teddy Roosevelt)

When Mortimer is sitting in the graveyard, one of the tombstones has the name Archie Leach on it. Archie Leach is Cary Grant's real name.